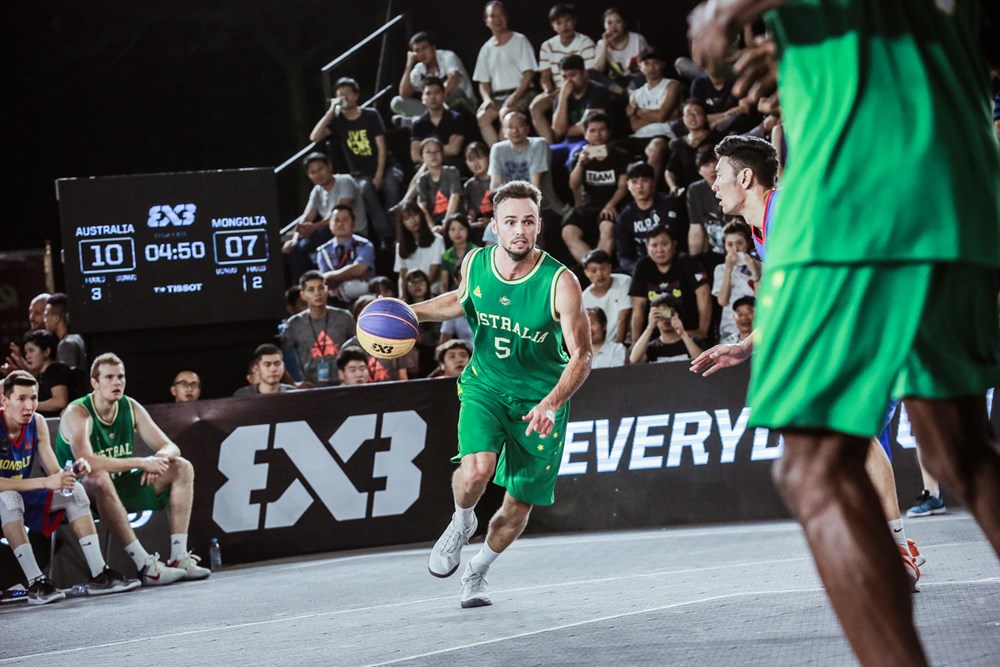 Australian men’s coach Dave Biwer says he feels “pretty comfortable” about his team for this weekend’s FIBA 3×3 World Cup Qualifiers, despite a couple of unknown commodities.

The four-man group of Andrew Steel, Tom Wright, Tim Coenraad and Greg Hire have never played together. Steel and Wright have an in-built chemistry from past national tours and playing together with Spectres iAthletic in the NBL 3×3 Pro Hustle, but Coenraad and Hire need to be incorporated into the mix.

Furthermore, Hire has minimal 3×3 experience under his belt, with the Geelong 3×3 Pro Hustle and the Australian national selection camp being his only 3×3 ventures.

Despite these two challenges, Biwer is buoyant the new-look Australian squad has enough talent to overcome their innate roadblocks.

“When you look at where we were a year ago at the Asia Cup, it is Hire in for Owen Odigie and Coenraad for Tom Garlepp…it’s a pretty good switch up,” Biwer said.

“Tom Wright is a much better player than he was a year ago.

“I think from a hustle point of view, Greg Hire is unmatched. Odigie brought us so much athleticism and is still a big part of our team, but we really want to see this hustle level and he (Hire) has a way of haunting shooters, so he doesn’t look to score himself, he plays off all the scorers. He does an amazing job.

“The fact that Steelo, Coenraad and Tom Wright can score, and we have a guy who is willing to do the smart work with Hire, I think it could really come off really well.”

However, Biwer does acknowledge the squad will need time to gel and hopes to squeeze in extra training sessions before Australia’s first game in Puerto Rico.

“They haven’t played together, so unlike the women, we were unable to get them all together because of commitments they made prior to being selected.

“We have training in Puerto Rico, we will probably try to put two in, just to see if we can get some chemistry and go from there.

“It’s big IQ stuff with all of those guys so I feel pretty comfortable.”

The men’s first pool game is against Czech Republic on Sunday morning at 7:30am AEST. Their next challenge will be against host nation Puerto Rico at 9:10am AEST, before finishing their pool games on Monday against Romania at 4:00am AEST.

All matches will be streamed on the 3x3Hustle Facebook page.

Steel and Wright are Australia’s number one and two ranked players respectively, so their exploits on the 3×3 court are well known.

Four-time NBL champion Hire is new to 3×3, giving the format a crack after calling time on his pro career, and Biwer has been extremely impressed with what he has seen, which has led to an early Australian call-up.

“I saw him in camp, and I saw him surrounded by three scorers. I’m not sure he was the best in camp, but he was up there with the top three.

“I know at the Pro Hustle he had to take on a different role, it wasn’t as clear cut. I feel comfortable as a group he will know his role.

“I haven’t seen anyone play that hard. He is hungry for it and I can only see good things coming out of that.”

Illawarra Hawks veteran Coenraad has displayed improvement in the 3×3 game whenever he takes the court, developing a clutch gene which saw him nail numerous game winners over the course of this year’s 3×3 Pro Hustle.

Combined with his immense long-range shooting accuracy, and the 33-year-old has the potential to make a massive impact on the Australian team.

“You can almost see it before he shoots it if he is going to make it. He becomes so confident. He has got a killer instinct. He wants to put teams to bed.”