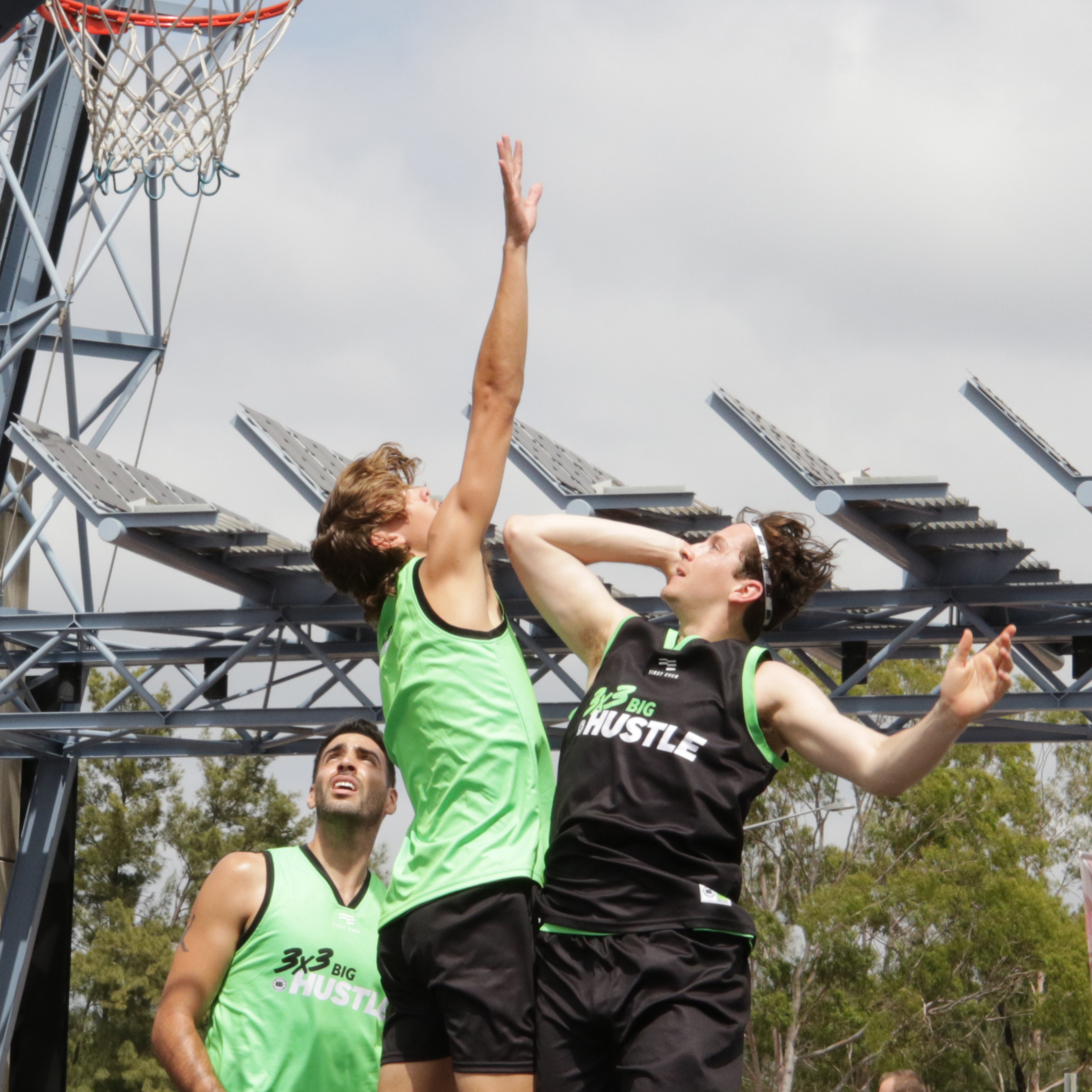 Somehow the heat didn’t seem to faze Callum Norris, nor did it particularly trouble the rest of his Sutherland squad.

Despite the mercury rising to 33 degrees, and even hotter at court level, Norris and his side kept their cool in several tightly contested matches, coming out of their pool with five wins from five games, and averaging a competition high 9.4 points per game. Sutherland’s scoring went to another level in the finals, putting up 17 points against The Bus Drivers (13) in the semi-final, and 16 points in the their grand final victory over FIBA 3×3 Asia Cup champion Tom Garlepp’s North’s Bears 2 (13).

Adjusting to the manic pace of 3x3Hustle basketball appeared to be the main challenge for the sides lining up for Big Hustle NSW, with several low scoring contests being played out in the early stages. But for Norris the pace of the game wasn’t a huge adjustment for the boys—with the quick and physical game style playing into their hands.

“The big takeaway for us was the physical nature that you can play with while playing 3×3,” Norris said.

“You can play quicker and get more shots up in a game. The fast paced and physical game that 3×3 provides is what I enjoy most.”

Sutherland livewire, Lachlan Barker, used his explosive pace and vertical prowess to trouble opposition defences, throwing down a huge dunk, and getting to the basket with ease throughout the pool games. Barker’s athleticism, coupled with Norris’ strength in the low block, made them the most well rounded side in the competition.

Sutherland are, of course, no strangers to the 3x3Hustle scene, with appearances in the 2018 Pro Hustle and Sydney Challenger events under their belt> Norris counts those experiences as some of his most memorable in his time playing 3×3 basketball.

“The 2018 Pro Hustle three and Sydney Challenger events were the best.

“These were in an iconic location in world geography (the Sydney Opera House), and we were playing at the highest level in the 3×3 world in Australia,” Norris said.

The 3×3 Big Hustle NSW also showcased some of the most talented, young 3×3 ballers in the state, with the open women’s, U12, U14, U16, and U18 competitions delivering highly competitive basketball across the whole weekend.

Winners of the open women’s competition, the Norths Bears, edged out Talent ID team 1 to claim victory in the open women’s Big Hustle, meaning they’ll be heading to 3×3 Big Hustle Nationals in Melbourne. They’ll be joined by Ninjas ATC, Bankstown, Hooperz, and 2-Tone-Patek – as well as runners-up Hills 1 and 2, Norths 1 and 2, and the Boogee Boyz.

The 3x3Hustle train keeps on rolling, with upcoming events all over the country. Visit our event page to see if there’s one going down near you, and check us out on our social channels for more 3×3 hoops content.